Whether they’re painting profanity displayed on public roadways, or throwing coffee on Romney volunteers, Democrats seem to think breaking the law is a good campaign strategy.  Having just received a tip from a reader, it looks like our liberal friends are sending unsolicited text messages as well: 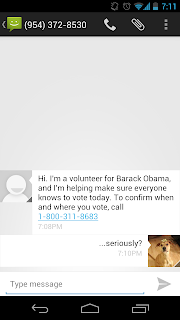 Luckily, this particular voter had a sense of humor about it. However, how the Obama campaign obtained his cell phone number remains a mystery. Perhaps the Obama campaign would like to be reminded of the Telephone Consumer Protection Act (TCPA) and the Controlling the Assault of Non-Solicited Pornography and Marketing (CAN-SPAM) Act?

UPDATE: Apparently our reader wanted to provoke a response.  He was unsuccessful, but thought we’d share his humorous conversation: