Eight days ago, the Ohio Liberty Coalition-backed candidates, Ted Stevenot & Brenda Mack, backed away from challenging Governor Kasich in the Republican gubernatorial primary.  Presumably, this can be attributed to Mack’s legal problems.

And, as Nick reported earlier, the OLC seems to have regrouped behind a new candidate team of Donald Allen & Kelly Kohls.  One would have thought the OLC would have learned its lesson, but, as if it were Groundhog Day, legal issues seem to haunt the OLC candidate team, yet again.  From the liberal blog, Plunderbund:

Would it surprise you at all if I told you Kohls also has financial issues?

While Kearney and Mack both have tax liens that they are actively paying off, Kohls took a different path to resolving her money issues.  In 2010, she and her husband declared bankruptcy with nearly $1 million in unpaid debt including three car loans and over $829,000 in mortgages on their $450,000 house.

Like Yogi Berra said, it’s like deja vu all over again.  Another OLC candidate, another set of legal issues.  A quick search of the Warren County Clerk of Court site reveals more: 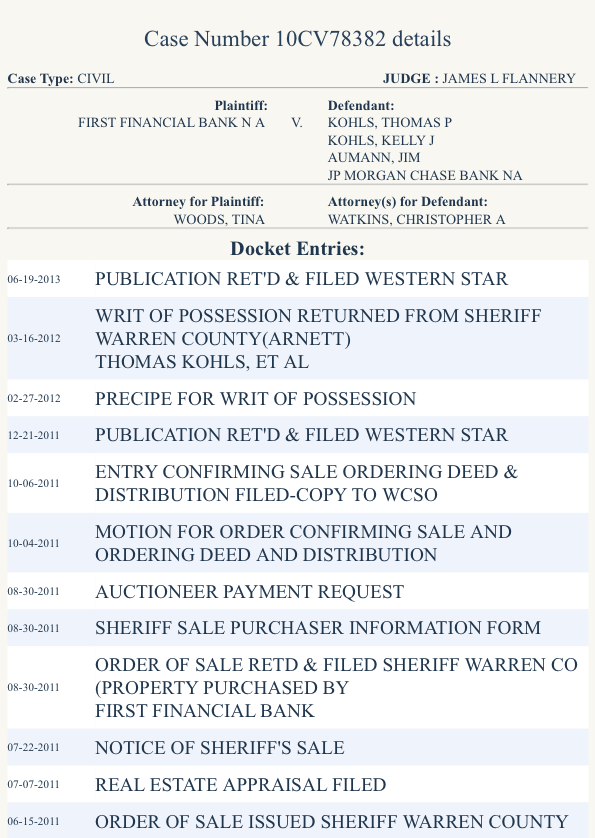 But the controversy doesn’t stop there.

Kohls, as President of the Springboro School Board, oversaw this bit of controversy as well:

Sonny Thomas, who is the president and founder of Springboro Tea Party, according to this website, was at the meeting to speak about summer Constitution classes that the district had been considering offering. The school board cancelled the classes, however, amid allegations that they had religious undertones and were “tea party leaning,” reports local outlet WHIO-TV.

I’m all for free speech, but these are the kinds of things that come out during political campaigns—particularly statewide political campaigns.  It’s the kind of thing that sinks a candidate, and leaves those who supported said candidate with egg on their faces.

And that’s where the OLC finds itself with this latest news: on the brink of losing any credibility that they may have left, and for what?  Trying to take down a Governor with whom they agree with 90% of the time?

It’s a good question—one that seems to be garnering more and more attention.

If the OLC is backing Allen & Kohls, this could be enough to completely blow up the organization.  And those pulling the strings behind this latest effort have demonstrated they couldn’t care less.  It all seems like some personal vendetta to them, and they’re exploiting conservatives, and all that we stand for, to achieve it.

If theses folks continue to pursue what could at best end in an incredibly small pyrrhic victory, they will have sacrificed a once-great organization in the process.

Like Stevenot & Mack before them, here’s hoping Allen & Kohls seriously reconsider the race.