Skip to content
It’s no secret that plenty of political figures use a book as a way to introduce themselves to voters before a campaign.
However, I think we’d be hard pressed to find a politician selling a book that describes how one stares at a raisin to gain a greater appreciation of self. 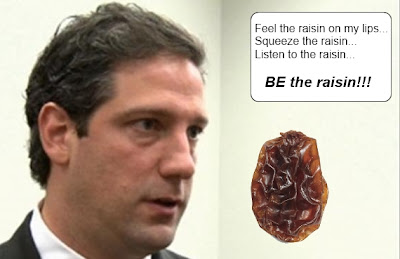 Seriously.
Congressman Tim Ryan, about a week after making it known he was interested in running for Governor, has chosen this as his introduction to Ohio’s voters.  His book, A Mindful Nation, discusses his interest in the idea of “mindfulness” and it’s applications to daily life.

A Plain Dealer article from Saturday goes into more detail, but the idea of staring at a raisin comes from one of the first exercises behind this way of thinking.  A student gazes at a raisin and holds it to their lips without eating it then they squeeze the raisin to hear its sound.  By the time they actually eat the raisin they are aware of all of the sensory urges that it elicits.  Apparently the awareness is the lesson.
I’m not debating whether “mindfulness” is good or bad, because I frankly don’t care.  I’m just surprised that he thinks the study and teaching of this style of thinking is more important than saving jobs in his district.


The Vindicator had an article last week that discussed upcoming teacher layoffs in Ryan’s district.  The teachers were told to start looking for new jobs now because many will be laid off this summer.
So what does Tim Ryan do?  Instead of finding ways for Youngstown to save money, he spends his time securing $982,000 in grants for the teaching of his preferred style of thinking to elementary and middle school students in Youngstown and Warren.  Instead of encouraging shared services and union reform, he spends his time hawking his book in an attempt to lay groundwork for a future political race.
He even refrained from the typical Democrat response and didn’t call for more money to be thrown at the problem.  Instead, he found it far more worthy to teach kids how to meditate.
But don’t worry Youngtown teachers, Congressman Ryan has a suggestion on how to deal with your upcoming unemployment.  Just remember, “Happiness is found by deeply experiencing the exact moment we are in.”
So don’t worry about that whole “employment” thing.  Tim Ryan’s got your back, just enjoy the exact moment you are in and everything else will be fine.
Right?

UPDATE (Bytor): Not only did Congressman Moonbeam start a program to teach Warren and Youngstown school kids how to meditate with raisins, he did it using almost 1 million of YOUR federal tax dollars.

Deep breathing exercises, meditation, instructions on how to think before acting, and methods on how to talk through a problem are all part of a curriculum being implemented in specified kindergarten and elementary classes in the Youngstown and Warren school districts. The Skills for Life program was made possible by a $982,000 earmark secured in 2009 by U.S. Rep. Tim Ryan, D-17 Ohio, for the Collaborative for Academic, Social and Emotional Learning. Ryan is a champion of the effort and a strong advocate of developing “mindfulness” for personal and institutional growth in the United States.

What an appalling waste of taxpayer dollars. For Democrats like Congressman Moonbeam Tim Ryan, I suppose trillion dollar deficits are OK, as long as we are teaching kids important subjects like “mindfulness” and “raisin meditation.”