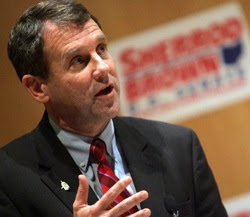 Our consequence is that we are stuck with Sherrod Brown, arguably the Senate’s most left-wing member, for another six years. And he’s already exhibiting why he is a textbook liberal extremist.

The Columbus Dispatch reports workers who used up six months of state payments could get 73 more weeks of aid under a federal benefits program extended several times. Some advocates want Congress to extend it again.

Democratic Sen. Sherrod Brown wants an extension included if Congress makes a deal to avoid the automatic tax increases and spending cuts known as the “fiscal cliff.” His spokeswoman says too many Ohioans are still looking for work.

Not matter what the issue, Sherrod Brown’s solution is always “more government spending.”

I believe in reasonable safety nets, but two years of unemployment benefits is far too long. At some point, the program goes from being a safety net for people between jobs, to an incentive to just stay home and live off of the government dole.

While many in Congress are trying to come to a compromise on a mix of spending cuts and tax policies that would increase revenue, Sherrod Brown is going his own way with a demand for MORE government spending.

How did this guy ever get elected with such a bad ballot name anyway?