In today’s education system, the quote says it all.  Whether you believe unions are 100% in the right, or whether you’re a right-to-work supporter, the fact remains: if union representatives cared about the kids, schools throughout the United States wouldn’t be failing right and left.

That’s just the way it is; and if you don’t believe me, just look at the hundreds of thousands of children left wandering the streets of Chicago while unionized educators scoff at their $76,000 yearly salary.

So, given the hurdles to a quality public education, what’s a parent to do?  That’s the premise of a new movie making waves throughout the political culture. 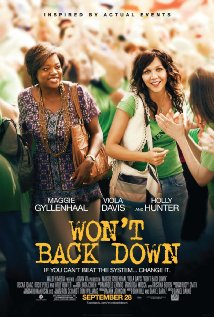 Students First, an organization set on finding common sense solutions to America’s education problem, was kind enough to host a limited showing of this powerful film last week.  Brent Kent, the organization’s regional outreach manager, said the event was meant to educate the public on the benefits of parent-teacher empowerment.

“With parents, their only special interest is their kids.  It’s just starting that discussion.  And this isn’t about any specific policy, but it’s a powerful movie that’s meant to get people talking.

And start a discussion it has:
Regardless of what’s being said about the politics of the film, the movie itself has its fair share of moving scenes.  Whether it’s a kid struggling to read amid her snickering peers, teachers complaining about less-than-efficient co-workers, or watching the look of hopelessness cross the faces of dozens of parents as their children failed to make the “lottery pick” of a successful charter school in the area, the film keeps the audience engaged from beginning to end.
But probably the most moving scene in the movie comes when Jamie Fitzpatrick (played by Maggie Gyllenhaal), a single-mother struggling to provide an education to her child, in a moment of frustration, exclaims, “why do I gotta let her down on this?!”
In that moment, you see what parents truly want for their kids: an opportunity for a quality education.  A solid education can set a child up for a bright future, and (once again, as the movie presents), when you have quality schools, crime rates drop and the neighborhood itself improves.
Education is the key to all of that.  And unfortunately, a quality education is being denied to so many American youths in today’s public school systems as teachers, administrators, parents and children find themselves all at odds.
While many have made the movie–and the movement–out to be a knock on unions, that argument misses the mark.  First, Gyllenhaal is an avid Democrat.  There’s no way she signs on to this movie if it was just “right wing propaganda.”
The film, and the mission of Students First, isn’t about union bashing, but coming to common sense solutions to the problems facing our education system.  From Brent Kent:

“Look at the Cleveland teachers union who made some heroic efforts and concessions and tried to save Cleveland Public Schools by instituting meaningful teacher evaluations, school accountability rules and eliminating seniority based layoffs.  It’s the perfect example of teachers working alongside parents, and what schools can do if they all work together.”

Truly, the Cleveland Plan is the standard in bipartisan leadership, as we’ve detailed here on this blog.  It’s something that can, should and (God willing) will be emulated all across the country, with teachers, parents and politicians from both political parties coming together to create a solution.

Not as a victory for politicians, but for Ohio’s future–an investment in our children and grandchildren.

That’s the mission of Students First.  And that’s the message of ‘Won’t Back Down.’  Putting children first and giving hope to kids for a better, brighter tomorrow.

Though, I’m not a huge fan of all that Steelers gear.