These are exactly the kinds of articles Governor Strickland hates to see, especially when learning the last four polls of likely Ohio voters have Kasich up an average of 8 full points. 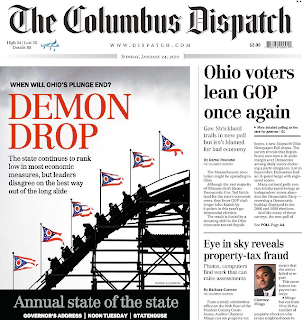 But what has to frustrate voters more are quotes like these from Governor Strickland:

Democrats like to harass Kasich – pleading for “details” about his plan to fix Ohio. And yet here we are with the elected Governor of Ohio speaking in ambiguities about what he’s doing to turn around Ohio as he promised. He says he’s dealing with the recession. He says we’re prepared for the recovery that will come.

Those words say a lot about the Governor.

First, let’s focus on his “dealing with this recession”.

Take a look at the Governor’s own self-defined record of accomplishment, and tell me what you find that “deals with the recession”. His list of “accomplishments” are the following: Reforming Education, Health Coverage for Ohio Children, Ohio Jobs Stimulus Bill, Tax Cuts for Senior Homeowners, University System of Ohio, Tuition Affordability, and Advanced Energy.

The Ohio Jobs Stimulus Bill is the only policy designed to “deal with the recession”. It was passed a little less than two years ago and the results have been uninspiring, to say the least. The only other piece of policy he’s discussed that “deal with the recession” have been his recent efforts to renew Bob Taft’s Third Frontier program – a program that brought only 2500 jobs a year to the state.

Strickland also says Ohio is “prepared for the recovery that will come”.

This one statement says so much about why Strickland is behind in the polls. He’s not a leader. Rather than proactively working to create an environment that will enhance Ohio’s ability to attract business, Strickland is simply sitting back and waiting for “the recovery that will come.”

But that doesn’t stop the Governor’s staff from using the Dispatch article to brag about DuPont indicating they will create 80 new jobs at their plant. That’s great, Governor. 80 jobs.

But Ohio needs about 4,000 more “DuPonts” to make up for the 317,055 more unemployed Ohioans since Strickland became Governor. And that doesn’t even count the other 66,000 that have left the workforce completely.

That is a disaster.

And Strickland has simply sat back and hope it all goes away.

Next time Strickland claims he’s “dealing with this recession”, I hope a reporter asks for more than simple ambiguities and platitudes. As the elected leader of the state, it’s his responsibility to help foster an environment that works to solve this crisis – not simply hiding under his desk until the clouds clear.