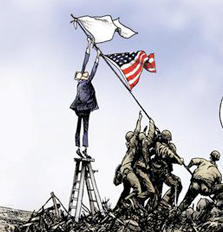 This morning the Washington Times confirmed our surrender of Afghanistan.

Folks, when there are no conditions necessary for the transfer of our troops out of Afghanistan – when no levels of success must be met before abandoning our mission – that is surrender.

And as Rich Galen pointed out in last night’s Mullings, Obama used semantics to highlight how the mission doesn’t need to be successful, only our exit must be….

Shortly after the President finished, my phone rang. It was Brigadier General Mark Kimmitt (Ret.) calling to ask me what part of speech the word “successfully” was in this sentence:

“I will end the war successfully.”

“Successfully,” I said, “modifies the word ‘end’ which is a verb. Hence ‘successfully’ is an adverb.”

This military man immediately understood that the President’s goal is not to succeed in Afghanistan, but to end the war in Afghanistan.

End, without victory, and without achieving objectives = surrender.