This stuff almost writes itself.

Smith, 27, a native of Bronxville, N.Y. and graduate of Dartmouth College, arrived in Ohio Sunday to take over the campaign’s communications operation. In 2009, Smith served as press secretary for then-Democratic Gov. Jon Corzine’s unsuccessful re-election campaign. Earlier in the year, she worked for Terry McAuliffe’s failed bid to win the Democratic gubernatorial nomination in Virginia.

Rather than focus on the personal, let’s take a look at Smith’s record in 2009 managing communications for now former Governor Corzine.

The White House was so concerned about Corzine’s chances during the summer that Corzine’s aides feared the first-term governor was being pressured to step aside for a stronger candidate. Those fears turned out to be groundless, but were part of the reason Corzine hired Joel Benenson, who has helped impose discipline on a struggling campaign. 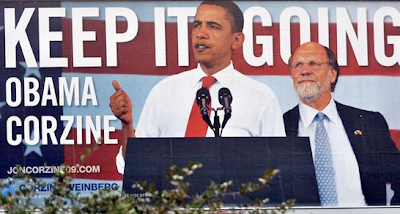 Considering Obama refuses to even be seen with Strickland, taking this kind of picture may be difficult. But I do hope they pull it off considering Obama’s disapproval in Ohio currently sits at 59% among Independents in Rasmussen’s latest poll.

The Democrats, Jon Corzine and Creigh Deeds, did everything they could to spotlight their opponents’ views on social issues, in particular abortion and guns — ads, speeches, surrogates, attack web sites . . .

And in the end, it got them diddly-squat. As noted below, a staunchly pro-life attorney general did exceptionally well in northern Virginia.

The lesson is, pay attention to what’s worrying voters the most. The vast majority of voters in both states said in exit polls last night that they’re very worried about the economy.

Well, at least we now know for sure what to expect from the Strickland campaign.