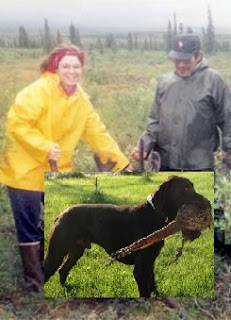 The McCain campaign needs a new angle…a stunt, if you will, that can hit home with a good chunk of the swing vote electorate in many of the remaining vital states…namely Ohio, Pennsylvania, Colorado, Missouri, Florida, North Carolina and Indiana.

In particular, there seems to be an untapped group of voters that need to see something new and different than the usual campaign rally they may catch on their local news. These people may be “D” on the lunch pail economic stuff. They may be pro-union and anti-NAFTA. Economically they are probably working class with a few middle class thrown in. And while they aren’t card carrying members of the NRA, they do like to do one thing…

US Fish and Wildlife statistics place the number of hunters and fisherman at around 42.5 million. They may be somewhat indifferent to some of the social issues like abortion and gay marriage. They’re likely pro-military…but could be tiring of the war effort thanks to the media’s constant negativity. They are not, however, ready to endorse Obama. In fact, in a survey of hunters back in August, McCain only led 45% to 31%. There is plenty of reason to think this gap has closed since then. It’s time to widen it back up.

Starting tomorrow it’s pheasant hunting season in Pennsylvania. So let’s make it an event. The Gov is already scheduled to be in Shippensburg, PA on Oct. 28th. Before the rally get Sarah out in the field with some ‘Joe the Hunters’. I’m sure there are plenty of local campaign volunteers that hunt and would be happy to lead Mrs. Palin on a short pheasant massacre. Bring along a few press. Get some good shots of her with a gun and some bird dogs. Remind folks why they initially identified with her, before the media savaged her and her family.

Concerned with the image of her actually shooting pheasants or maybe missing and coming up empty? Fine. It’s currently bow-only deer hunting season in PA. Stop by the deer-check station and, as my friend Amy suggests, show she’s supporting hunting without actually killing something herself…”that’s a nice deer there, Joe. Have any venison jerky around?” Maybe even the suburbanites will be happy to see Sarah supports getting rid of surplus Bambis.

McCain isn’t a hunter and putting him out there would be no different than Kerry in 2004. But Sarah is different. She has a history of hunting and has embraced the tradition in Alaska. The event can be framed as Sarah getting a chance to take a short break from the long campaign trail and embracing a common recreational tradition that Alaska shares with much of middle America.