Recently, I caught wind of an interesting rumor from a reader down in Texas.

Caroline was good enough to share some info about Craig James and his possible interest in running for a seat in the U.S. Senate representing the good people of Texas. 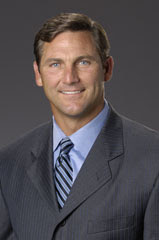 Yep. Apparently the announcer and analyst for college football on ESPN had caught a bit of the political bug.

Ok, here’s the lowdown on James. He’s a rancher north of Dallas and everybody knows about his broadcasting. He did some lobbying in Austin for a bill the last legislative session and some people approached him about running for something. One of his old SMU connections who was Rudy’s national finance guy got him thinking about the Senate, and then mentioned it to Gov. Perry, who liked it. So he’s been working the aisles behind the scenes and trying to get up to speed on policy, etc. Then they commissioned a DC firm to do some polling with all of the declared and potential candidates in the race, and he came in 4th: Dewhurst was 1st (lieutenant gov), Bill White (former mayor of Houston), John Sharp (longtime Texas Dem), and James. He was ahead of 3 other R candidates who have been running for awhile. Once they threw in the ESPN and football player stuff, he was first. That got the consultants interested.

He’s a fairly bright guy even though he sounds simple minded on TV. He’s definitely got the bug and will run for something. Even if Hutchison loses the GOP primary for Governor and stays in the Senate, her term is up in 2012 and he may be willing to wait for that.

Things that make you go hmmmm.