The Council of State Governments scoured the nation to tally the total number of new green jobs created last year. And what did they find? Ohio ranks first.

In fact, Strickland is right. CSG did rank Ohio first, and by quite a bit. Here’s a clip from the report: 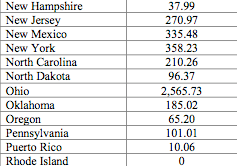 What first struck me was how few jobs were listed. For something destined to be a centerpiece of Ohio’s economy, as Strickland framed the argument, I can’t say I’m that impressed with 2,500 jobs.

And Strickland failed to tell Ohioans something else – the analysis from CSG that the Governor based his braggadacio upon was a study of “green” jobs created by Obama’s universally panned stimulus, not jobs created by his state government. In other words, Strickland can’t take credit for these jobs.

But, for the sake of argument, let’s take the Governor at his word and assume this is really how he wants Ohio’s economy to grow – by begging for federal dollars to pay for environmentally friendly jobs.

Well, as the CSG reports shows, 2,296 of the 2,565 jobs Strickland is so proud of come from one single grant – the Weatherization Assistance Program.

The cost of this grant to taxpayers is $267 million. Now, to be generous, let’s say half of those dollars go to pay for materials. That leaves us with jobs that cost each and every one of us $58,144 each.

Keeping in mind these are the kinds of jobs Strickland wants to make the focus of the state economy, and remembering the number of unemployed Ohioans has increased by 339,900 since the Governor’s inauguration – at $58k a job it would cost taxpayers over $19.7 billion to pay for the jobs lost under Ted Strickland’s watch.

Now, we obviously don’t assume Strickland wants to fill the hundreds of thousands of jobs lost in Ohio completely with “green” jobs funded by the federal government. But the immense cost of these jobs to the American taxpayer highlights how horribly inefficient it is to abuse the hard-earned money each Ohioan gives to the government each year.

Finally, the AP recently reported that the very program Strickland wants to emulate has proven to be vulnerable to abuse:

State inspectors look at just a fraction of the projects in Ohio’s Home Weatherization Assistance Program. Critics say the program is vulnerable to abuse and that sloppy workmanship will go undetected as projects increase with new federal stimulus dollars.

The Columbus Dispatch reported Sunday that state inspectors routinely find mistakes — from leaky ducts to improper ventilation. Ohio is required to inspect one in 20 jobs.

This isn’t play money you’re playing with, Governor. Even though the project is funded with federal dollars, those same federal dollars still come from hardworking Ohioans.

This isn’t the way to save Ohio’s sinking economy. This isn’t how you Turnaround Ohio.