President Barack Obama, in an interview that aired Sunday, gave himself “a good solid B-plus” grade for his first year in office.

No, really. How in the hell does he give himself a B+?

His only significant accomplishment, the federal Stimulus, has vastly underperformed according to his Administration’s own metric.

International fronts? What has been accomplished? Is there anything measurable, besides miles traveled, words uttered, and bows given?

Now, I don’t expect the President to give himself the D- he deserves, but I do expect a reasonable answer. The correct response would have been to simply say, “it’s not up to me to grade myself – it’s up to my constituents, the American people.” Yeah, it says nothing, but that’s what you do when you have no substantive accomplishments to point to.

The problem for the President is the American people aren’t too happy with him. Rasmussen’s latest “passion index”, which highlights the number who strongly approve and disapprove, was at 23/42. The -19 margin is the largest yet for Obama. Amazingly enough, Bush’s “strongly disapprove” number in the final month of his Presidency – 43% – was only one point higher than Obama’s right now.

Think about that for a second. The number who strongly disapprove of President Obama is statistically even with that of the less than revered former President Bush. It’s no wonder the left is flailing and the electorate is clamoring for a return to Republican leadership in Congress.

And it’s not going to get any better anytime soon.

Check out the most recent issue of Rolling Stone and the article from political columnist and progressive Matt Taibbi. Here are some absolutely stunning highlights:

“What’s taken place in the year since Obama won the presidency has turned out to be one of the most dramatic political about-faces in our history.“

“Despite being perhaps more responsible for last year’s crash than any other single living person — his colossally stupid decisions at both the highest levels of government and the management of a private financial superpower make him unique — [Bob] Rubin was the man Barack Obama chose to build his White House around.”

“A president elected on a platform of change was announcing, in so many words, that he planned to change nothing fundamental when it came to the economy. Rather than doing what FDR had done during the Great Depression and institute stringent new rules to curb financial abuses, Obama planned to institutionalize the policy, firmly established during the Bush years, of keeping a few megafirms rich at the expense of everyone else.“

“But whatever jobs the stimulus has created or preserved so far — 640,329, according to an absurdly precise and already debunked calculation by the White House — the aid that Obama has provided to real people has been dwarfed in size and scope by the taxpayer money that has been handed over to America’s financial giants.“

“There’s no other way to say it: Barack Obama, a once-in-a-generation political talent whose graceful conquest of America’s racial dragons en route to the White House inspired the entire world, has for some reason allowed his presidency to be hijacked by sniveling, low-rent shitheads.“

“What’s most troubling is that we don’t know if Obama has changed, or if the influence of Wall Street is simply a fundamental and ineradicable element of our electoral system. What we do know is that Barack Obama pulled a bait-and-switch on us. If it were any other politician, we wouldn’t be surprised. Maybe it’s our fault, for thinking he was different.”

Honestly, I couldn’t care less about his progressive whining of Wall Street takeovers – what I find interesting is how indicative this article is of the walls crumbling around the President.

These are the same guys who are supposed to be the very backbone of Obama’s support system. After all, he’s the pop culture President. 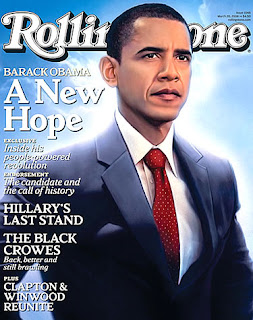 Now they eviscerate him.

And you can see it in the polls, where even the under 30 demographic has him at -2 in approve/disapprove.

The facade is crumbling before our very eyes.

With that said, don’t believe he doesn’t have the talent to turn this around by 2012. Much stranger things have happened.