Yesterday, Ted Strickland’s campaign manager sent an e-mail to supporters asking them to contribute to his campaign.

Below is a screencap of the letter: 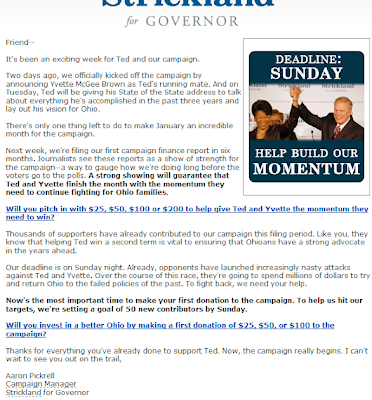 As you can see, Pickrell is asking supporters to contribute to the campaign in order to make sure the Governor makes a “show of strength” in the campaign finance report that will be filed at the end of the month. In order to get these contributions counted, he sets a deadline of Sunday.

Except there is one problem.

Ohio campaign finance law states that only contributions received before December 31st may count for this reporting period. Below is a screencap from the Secretary of State’s office highlighting the deadline.

Now, if I recall correctly, there is some flexibility on this deadline, but only until January 15th. I admit, I may be wrong on that, but I think it’s safe to say that campaigns are not supposed to be reporting contributions made through this Sunday.

Additionally, another aspect of the Strickland letter gave me a little chuckle. Near the end, Pickrell asks for 50(wow!) contributors by Sunday. 50 contributors. In four days. If Pickrell translated this goal out to a whole month, that would be like asking for 375 contributors over the course of 30 days.

For reference, the Kasich campaign had a fundraising campaign looking for 2,010 online contributors in the month of November.

In other words, it seems Pickrell doesn’t have the highest of expectations for his boss’ contributors.

2 thoughts on “Is Ted Strickland getting ready to cheat Ohio campaign finance law?”