Well, after getting a closer look at Strickland’s report, it looks like the situation is actually quite a bit worse for the Governor than initially discussed.

In other words, campaigns can essentially include an extra month in their contribution report, if they so choose.

In this case, Strickland did include the extra month and Kasich did not.

So, how much did Strickland raise in his extra month? $1.44 million dollars. 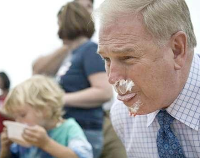 That means Strickland raised a grand total of only $1.18 million from July-December. That’s just $196,666/month, or only 48k more per month than Rep. Pat Tiberi raised in the 4th quarter for his 12th congressional district seat.

For comparison, Kasich raised $4.55 million during the same 6 month period, or nearly four times as much as the Governor.

It gets even worse for Jello Ted.

Now, Strickland’s people can make whatever excuses they like for these disturbingly bad numbers, but facts are facts – Ted Strickland vastly underperformed.

Once again, I’m happy to consent that Strickland maintains a $2.1M lead in cash-on-hand, as he should as sitting Governor. And as an incumbent Governor, he shouldn’t have any trouble maintaining that advantage.

That is, unless he performs this badly again.

7 thoughts on “Just how bad is Ted Strickland’s fundraising situation?”