Yesterday’s Wall Street Journal had an article that continued the meme we’ve seen the past few days about the White House showing concern over the state Strickland’s electability in Ohio.

In Ohio, White House political director Patrick Gaspard has been in conversations with Gov. Ted Strickland, whose approval ratings have slipped and who is facing a challenge from former Republican Rep. John Kasich. Democrats there say the White House is backing Mr. Strickland’s re-election bid but is focused on reigniting the grassroots effort that helped Mr. Obama win there in 2008 and would be necessary for success again in 2012.

Focused on reigniting the grassroots effort for Mr. Obama?

Ohhhhhh ok. So THAT explains the pictures that were sent to me of Obama’s Organizing for America grassroots event in Cleveland last month.

If you don’t recall the pic, here it is along with what I posted about the event. 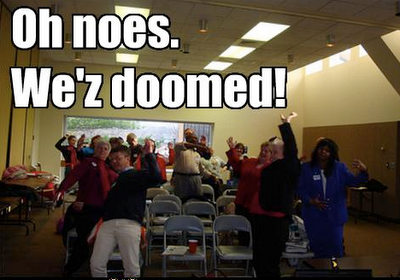 Our fearless [OFA] Regional Field Directors, David Cooke and Amy Diamond are the rockstars leading today’s training – see David in action as he guides volunteers to act “Matrix-like” to prepare for how best to respond to the evolving political landscape.

If this is the “reignition” the White House dreamed about, I think it’s safe to say there isn’t much to worry about.