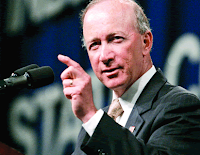 On Monday, a microstorm of news broke about IN Governor Mitch Daniels admitting an openness to running for President in 2012. Seeing as he had previously sworn off any interest, despite the buzz he creates in conservative circles, this was a seemingly big deal.

A loyal reader wrote to me this afternoon to ask me my thoughts on Daniels’ strategic decision to express interest now. This was my response.

Believe it or not, Daniels is already way behind when it comes to ’12 prep.

Folks like Pawlenty and Romney have already secured a good chunk of the finite number of top tier talent necessary to coordinate a Presidential election, and they are doing so far more transparently than Daniels.

Stating his intentions so publicly at least provides him a stage to increase his profile in the national media and enable him to establish positions that he has otherwise avoided(like foreign policy – I love Mitch, but I need to hear what he has to say on national security).

The timing was right for Daniels to make the move.

For those interested in learning more about Mitch’s amazing success and resume, I highly recommend reading this article that appeared in the National Review last June. If you aren’t already a fan, you will be.

If you’ve been paying attention to 3BP, I’ve been mentioning him as a possible contender since back in October. In two polls of 3BP’s readership, he finished 2nd among all contenders back in October and 1st among the Pawlenty, Giuliani, Thune, Barbour, Daniels group in November.

I’m not necessarily endorsing him, but I’m very happy to see such a seemingly solid candidate considering running for the highest office in the land.