At least, that’s what I hope I’ll be able to say to Governor Strickland by this time tomorrow.

Or maybe we’ll even find out tonight if the President announces the winners of the Stimulus High-Speed Rail dollars…..or as I like to call it, A Total and Complete Waste of Taxpayer Dollars.

Fortunately, I’m not the only one against the 3-C Rail Boondoggle.

It just so happens that, according to the Ohio News poll released this past weekend, Ohioans agree with me by a margin of 11 points. 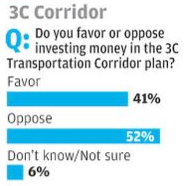 So, will Ohioan get stuck with a rail system that they neither need nor want? Well, that’s up to whether President Obama wants to try to give Governor Strickland some help by awarding the grant. It’s a political and fiscal loser, but I don’t think the Democrats realize that just yet.

And I hope we don’t have to find out.