What now, you ask?

The silliest part, he can’t even take credit for the mess. 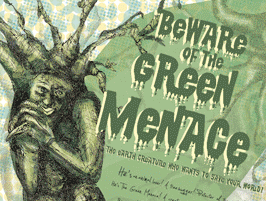 “We are shaping Ohio’s future by strengthening our advanced energy economy today. Supporting the growing wind and solar industries creates jobs, creates energy and reduces costs for hard-working Ohioans,” Strickland said. “These Recovery Act-funded projects take the state another vital step toward our goal of making Ohio a world center for advanced energy.”

While I’m happy Strickland isn’t wasting what little money the state has left on this particular project, this hasn’t stopped his repeated excursions throughout Ohio propping state funding of so-called green jobs elsewhere.

So the question is, how worthwhile is it to subsidize the green industry?

Well, while many of us know the answer, new evidence out of Massachusetts shows inefficient it really is:

[G]overnor [Deval Patrick] helped cut the ribbon at the opening of Evergreen Solar’s new plant in Devens, built with $58 million in state funds.

But half a year later the forecast for solar’s future — not to mention the governor’s other green initiatives — is looking cloudy with an increasing chance of failure.

Earlier this month, Evergreen Solar shocked everyone by announcing it is cutting up to half of the 800 jobs at the brand-new, taxpayer-bought Devens plant and shipping them to China. Solar panel materials will still be manufactured in Massachusetts (at least for now), but they will be assembled in a locale with much cheaper costs.

This shock came on the heels of Boston Power Inc. canceling plans to build a 600-job factory in Auburn. It had failed to win a $100 million grant from the U.S. Department of Energy to develop advanced battery technology. No government cash, no manufacturing plant and no jobs.

Ohio, as Massachusetts has learned, can’t manipulate the market to a point where these kinds of businesses are profitable. Only when the demand is there can it happen.

The Tax Foundation compiled another great example of this doomed venture:

Here is a report from Gabriel Calzada Alvarez, on green jobs:

Optimistically treating European Commission partially funded data, we find that for every renewable energy job that the State manages to finance, Spain’s experience cited by President Obama as a model reveals with high confidence, by two different methods, that the U.S. should expect a loss of at least 2.2 jobs on average, or about 9 jobs lost for every 4 created, to which we have to add those jobs that non-subsidized investments with the same resources would have created.

The study calculates that since 2000 Spain spent €571,138 to create each “green job”, including subsidies of more than €1 million per wind industry job.

You can quibble with those numbers for a long time but when you admit opportunity cost basically he has the right idea. This topic came up a few times in Edmonton and in the U.S. there is a guy named Bracken Hendricks pushing the “green jobs” argument. To be sure, there are very real benefits from limiting climate change. But if it takes more jobs to produce “green energy,” that is a net cost to the economy, not a benefit. Hendricks notes:

We estimate this sustained expansion in clean-energy investments triggered by the economic stimulus program and the potential implementation of Federal climate and clean-energy legislation, can generate a net increase of about 1.7 million jobs nationally.

We’re dealing now with something beyond the Keynesian short run and so those extra jobs are a drain of resources from elsewhere. If you wish, sub out the word “energy” and sub in the word “agriculture” and then reevaluate the sentence from the vantage point of 1900. Would it truly create net jobs — much less good jobs — to trash tractors and industrial fertilizer? The ideal situation would be a technology where very few jobs were required to create and distribute the nation’s energy supply. Remember Bastiat’s candlemakers’ petition against the sun? It’s turning out to be a better hypothetical example than Bastiat himself ever realized.

But will Strickland learn?