In an incumbent election, there are three requirements for every challenger:

If you accomplish all three, you win. End of story.

Let’s start with the first.

Usually, I hate using the word, “things”. It tends to imply bad and uncreative writing. But in this case, that ambiguity is required. If a challenger wants to win, he needs to identify whatever issue is of most concern to voters, and convince them that the incumbent has either not addressed the issue or made it worse.

To be successful in this endeavor, a challenger must be able to:

Using the Kasich campaign as an example, the campaign didn’t have to try very hard to identify the number one issue in Ohio – the economy, and the most important metric to determine its strength – jobs.

In this case, communicating the weakness of the economy hasn’t been a difficult challenge. Each voter has either experienced its difficulties themselves or know someone that has. In addition, the media has highlighted the economic crisis almost daily.

Since Kasich has only been required to submit 30 days of fundraising totals, this is currently a question mark, though I have been hearing good things. What is for sure is that Kasich must raise upwards of $16-17 million, as well as take advantage of whatever the RGA is willing to contribute, in order to highlight how Strickland has failed to “Turnaround Ohio.”

Number two is defining yourself as a legitimate alternative.

If the challenger is able to convince the electorate that things are going poorly, they know the voters will be looking for a viable alternative. This was clearly evident in the most recent Quinnipiac numbers as Kasich, despite having low name recognition, was able to still tie the Governor at 40% thanks to Strickland’s extremely low approval numbers. The voters want someone else. But they need to have just enough confidence that he’ll be able to handle the job.

As Peter Brown from Quinnipiac said, John Kasich must be the antidote to Ted Strickland.

Many Democrats seem to think Kasich’s association with Lehman Brothers is that magic bullet. There are three reasons why they’re wrong: 1) An exhaustive investigation by the Columbus Dispatch turned up no wrong-doing, and no other media organization in Ohio has given any indication that they buy into the charge. In other words, without the media pushing the story, Democrats must rely solely on their own paid media to communicate the message, however false it may be. That simply isn’t enough to drive home the message; 2) It isn’t easy to communicate to the electorate. “Kasich worked for Lehman” doesn’t say anything to the common voter. Instead, they need to spend time to explain their rationalization of why that association was bad. Need proof? The first video the Ohio Democratic Party released when Kasich announced his candidacy was over three minutes long. I’m sorry Dems, but the average voter has an attention span of about 1/12 of that. Three minutes may appease the few activists that have viewed it, but the average voter would turn it off within 10 seconds; 3) Look at the numbers. The last Quinnipiac poll showed that among Independents that know Kasich, he enjoys approval numbers that are 4 and a half times his disapproval numbers. Even among Democrats, Kasich’s approval is only 2% less than his disapproval. In other words, among the swing and Democrat voters that know Kasich, the message that he worked for Lehman isn’t working.

So back to the big question of this section, how does Strickland convince the voters of Ohio that the architect of the first national balanced budget since man walked on the moon doesn’t deserve a chance to fix Ohio?

They can’t. At least not with the ammo they have now.

Therefore, as long as Kasich puts up a few biographical commercials, he will be able to prove he is a legitimate alternative.

The 2009 New Jersey gubernatorial race had many similiarities to what Ohio may be in 2010. But most important among these was an unpopular Democrat incumbent Governor that failed to fix the state’s economy. In this viciously Democrat state, the Republican was able to get out the vote of the few Republicans and the larger number of Independents that wanted to see a change in Trenton versus the uninspired Democrat base. As we’ve gone over before on 3BP, polls have repeatedly shown a similarly uninspired Democrat base here in Ohio. But there’s a big difference – Ohio is much more of a swing state than New Jersey ever has been. In other words, as a percentage, the Democrat base is less than that of New Jersey, meaning Strickland has even fewer votes to rely on.

And this is why Kasich’s Lincoln Day speech tour while he was determining whether he was going to run or not was so massively important. He was able to take advantage of his considerable speechmaking skills to inspire thousands upon thousands of the most activist of Republicans around Ohio. These are the same Republicans that are responsible for manning and managing GOTV efforts throughout the state leading up to the election. These are also the same Republicans that have been begging for years for a serious conservative leader to support. And after seeing him on the rubber chicken circuit, they’re hooked.

Now, why did I bring all this big picture stuff up in a ginormous post entitled “The Minutiae of Modern Politics”? 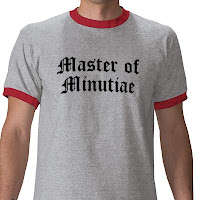 Because sometimes it’s easy for some activist Republicans to miss the forest for the trees, as it were. They can get caught up on things that have shown no indication of effecting the outcome of the race. Now, I know that it’s still a year out from the election and it’s easy for political hacks to get worked up over campaign minutiae. But all too often it’s political minutiae that can’t substantively effect any aspect of what I described above. Until there is any indication that it will have an effect, it’s a waste of breath, or bandwidth.

At the end of the day, I go back to what Peter Brown of Quinnipiac said a couple weeks ago:

Voters are much less complex than many of us think. They like things. They don’t like things. Most of them don’t focus on specifics.