Sometimes it’s the little things that say so much.

After my last post, I decided to take a deeper gander at the rest of the official blog of the Ohio Democrats.

One thing was missing.

The oldest post on the front page of the blog goes back to October 21st, 2008.

Guess how many times the Governor is mentioned.

In fact, take a look at their Tag Cloud. It says a lot about where Strickland stands. 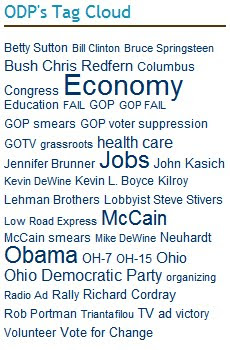 Bruce Springsteen appears more often on their blog than the Governor.

Considering how toxic he has become, I can’t say I blame them, but his absence is quite telling.

But make no mistake, if there was any substantive communication between the Governor’s political staff and the ODP, we’d see at least some effort to help him out.

Hell, look at the tag cloud. With ‘Economy’ and ‘Jobs’ as the two most talked about topics on the blog, it couldn’t be more clear that there is no communication between the Party and the Governor’s campaign operatives. With Strickland’s months-long education tour through Ohio continuing through the summer and into the fall, clearly the last thing he wants to talk about is the economy and jobs. And yet, the ODP makes those issues their primary focus.

The biggest question now is why things are this way between the ODP and Governor, and whether this division will mend before the campaign turns into high gear come next year.