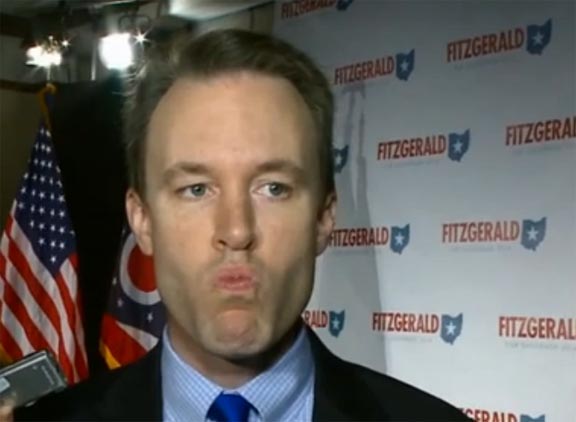 Ed Fitzgerald still isn’t getting many Ohioans excited enough about his campaign. The pre-primary fundraising reports came out today, and they are more bad news for Fitz.

Here are your top line numbers for this period:

Fitzgerald has essentially the same amount of money he did three months ago, with only a radio ad to show for it. Kasich, on the other hand, is still growing his war chest and has already starting advertising on television with two different ads.

When you look at “grassroots” contributions, those that are $100 or less, Kasich received 1538 more of these than Fitz, 44% more.

Once again, a huge chunk of Fitz’s money came from the Ohio Democratic Party to the tune of $107,000. The Ohio Republican Party did not contribute any money to Kasich.

She made one absolutely false claim. 92% of Kasich’s contributions came from Ohioans.

Over 1/3 of @JohnKasich contributions are out of state. Does #KasichWork for Ohioans?

We’ll give Fitz’s out-of-state campaign staffer the benefit of the doubt and just assume she miscalculated this one.

She also lashed out at Joe Vardon of the Dispatch for simply reporting the facts.

@joevardon Deficit of unbiased reporting at @DispatchAlerts grows as well

First, they tried bribing the press with pizza, now this. They sure know how to handle the media.

This one is simply amazing. Her candidate just got pummeled in fundraising again, and she starts mocking the amount that Kasich raised. Wuuut?

For someone whose watched @ohiogop weaken campaign finance law for 4 yrs, you'd think @JohnKasich would do a little bit better than $1.5

For reference, Lauren, Ted Strickland didn’t raise this much in the same period four years ago, and he was an excellent fundraiser.

I saved the funniest attempt to distract from the bad news for last. ODP Communications Director Brian Hester tried this one, and looks rather foolish when the rest of the information comes out.

The Senate Republicans have $3.3 million in the bank to the Democrats’ $132,000. Another brilliant faceplant for “The Modern Esquire”.