Last week at Georgetown, Christina Hoff Sommers spoke at an event and some students responded with trigger warnings and exclaimed that her mere presence constituted “violence”.

Tonight she is speaking at Oberlin College, a bastion of liberalism in northern Ohio. She is a guest of the Oberlin College Republicans and Libertarians.

Below see some of the same type of rhetoric, including accusations of supporting rapists. 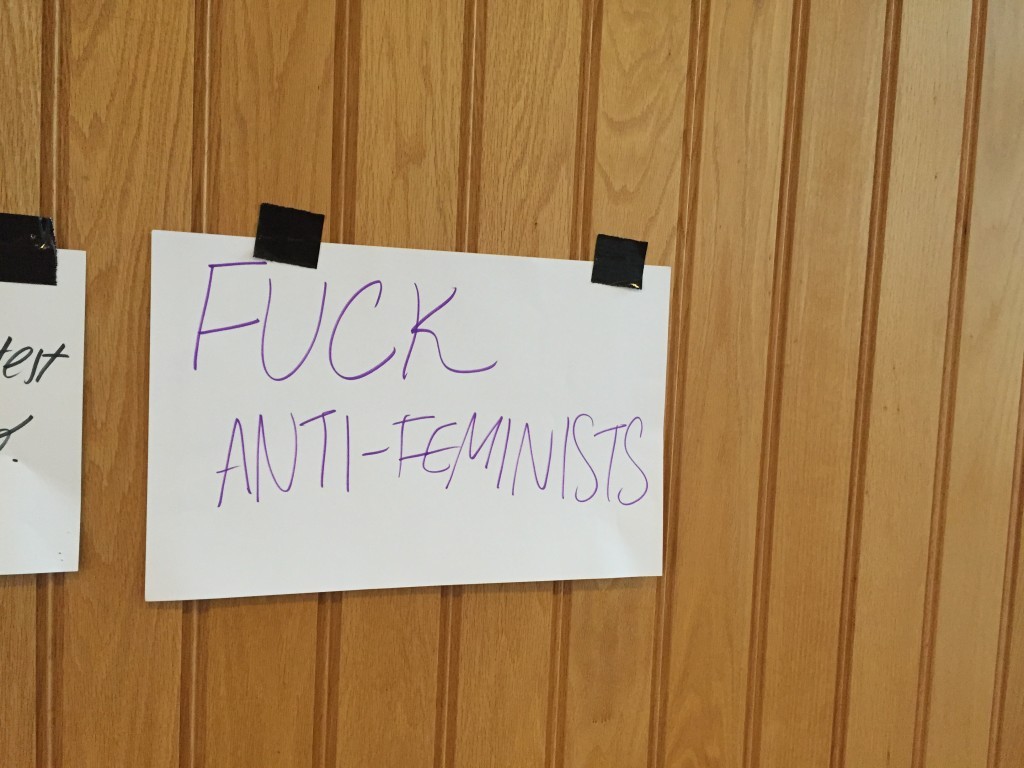 Two days before this event, the Oberlin Review posted this editorial, complete with a “trigger warning”, in anticipation of Sommers’ visit.

UPDATE: below is the announcement made to the audience about the “safe space” alternate event. Note how they mock with air quotes that some people in the audience were present to hear both sides of the issue.

Sommers does not deny that sexual assault is a problem. But she does contend that a recent study inaccurately and grossly overstates the number of victims, and that there is a danger in using questionable data to combat the problem.

For example, if a married couple has been drinking and then have consensual sex, that is an instance of rape according to the study.

For simply pointing out these flaws in the study, radical feminists have rabidly attacked Sommers and attempted to silence her. According to them, her mere presence at the university to speak constitutes a “rape culture”. All because she contends that statistical reporting of rape should be accurate and use common sense.

To “prove” that Sommers supports rapists, they actually posted a couple of her tweets. Behold the rape culture:

On April 13, Sommers tweeted: “The wage gap is a myth. So is ‘rape culture’ & claims of gender bias in science. But women’s grievance industry goes on.”

On April 15, Sommers also tweeted: “Looking forward to visiting Oberlin next week. I see my talk is already the focus of a lively campus discussion.” She shared OCRL’s event page with all of her followers on Twitter, after which many of them flocked to the page to defend her viewpoint.

Wow, I’m convinced. She looked forward to visiting Oberlin and shared the event.

Not surprisingly, many in the audience were quite rude and frequently interrupted Sommers. Many students sat in the audience with duct tape over their mouths, inferring that Sommers’ mere presence was an attempt to silence them. Ironically, by labeling her a “rapist supporter” and interrupting her, they were actually striving to silence her.

For most in the audience, rational discussion of facts is not even welcome.

Example: Sommers discussed the myth of the wage gap and explained that, in general, women choose to follow career paths that pay less than men. More women choose to study arts and humanities, while men are more likely to study engineering and science. Since there is more of a need and demand in the job market for technological expertise, people (men AND women) who go into engineering will earn more than people (men AND women) who major in art history, for example.

When she suggested that women could earn more and close the wage gap by changing their majors to something like engineering, many in the audience jeered loudly and exclaimed “Don’t tell me what to do!!”.

Don’t give me facts. Just shut up. That’s how Sommers was responded to.

I politely asked her, “But weren’t the last three girls?”

She glared at me and said, “This is an event about FEMINISM!”

After her discussion with the male student was finished, the same student said to me, “It’s offensive that you said to me “Should she only call on pretty girls?””.

“That’s not what I said. I asked weren’t the last three questions from girls? You misunderstood, miss.”

She continued to accuse me. I didn’t bother to inform her that I was recording the speech and had our words on tape. It wouldn’t have mattered.

Overall, it was a saddening experience that is all too common these days. Too often, we see a refusal to engage in a mutually beneficial debate of facts and solutions. If someone’s opinion differs, even slightly, they must be demonized, attacked and shouted down. They must be falsely accused of hate speech and supporting rape.

That attitude was certainly on display last night in Oberlin.

UPDATE: More posters from the event are below.