Less than a month into Donald Trump’s first term as President not a day goes by where he does not face some sort of criticism. Trump faces criticism on TV, Newspapers, and most abundantly on Twitter due to his own large presence on the social media website. It is no surprise that many of the critical tweets directed toward President Trump lean towards the vulgar side, but when a twitter account belonging to a politician’s spouse is one of the most vulgar, people take note.

Robert Kline is married to Sara Kline, the two-term Mayor of Stow. Both Robert and Sara are staunch Democrats and active Democrat donors. Stow is a more prominent community in Summit County, and a popular suburb of Akron.

While Mayor Kline’s twitter is generally filled with professional messages regarding her status as mayor, her husbands is a polar opposite. Robert fills his days sending nasty and oftentimes vulgar replies to President Trump’s tweets, with the most offensive shared below. Mr. Kline has found it appropriate to call Ivanka Trump “a whore”, encourage Donald Trump to commit suicide, and also suggest that Mr. Trump perform sexual acts on other men. With behavior like this on social media, his real-world actions are probably not far away. Bullying and vitriol like this does not end at the keyboard. 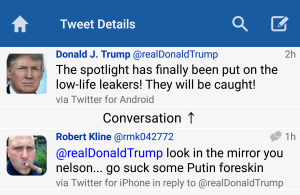 I was born and raised in East Liverpool, Ohio. I received my Bachelor’s degree from Youngstown State University and my Master’s degree from The University of Akron. Since college I have worked in the political field with campaigns, the party, and conservative groups. View all posts by Jim

28 thoughts on “Stow, Ohio: The New Home Of Democrat Vitriol”