This video is a couple of weeks old, but it’s still amusing to watch. After the first debate where Mitt Romney wiped the floor with President Downgrade, Candy Crowley of CNN held a conversation about Ohio with former governor Ted Strickland and Attorney General Mike DeWine.

Watch how DeWine politely lets Strickland have his say, but then when it’s the other way around, Ted can’t keep his cool and constantly interrupts DeWine.

Nice hissy fit, Ted. Denying there was ever a budget shortfall, and calling everyone a liar. That’s the best Ted can do to salvage his failed legacy. What makes it even more pathetic? Getting smacked down by Mike DeWine. Priceless.

We asked Strickland where he got his statistic that Ohio was sixth in economic job growth when Kasich took office. Strickland cited a 2010 report that he said was issued by the Federal Reserve Bank of Philadelphia. His aide, Louis Capobianco, subsequently sent an email that provided an August 2010 table compiled by Reed Construction Data, which he said had come from the Federal Reserve report. Our search of reports released by the Federal Reserve Bank of Philadelphia did not find that table, and the bank’s manager of media relations, Marliyn Wimp, said the bank did not release any reports that classified Ohio as the sixth fastest growing state.

“That must have originated somewhere else,” she said.

Heh. Of course it originated somewhere else. Like Louis’s computer maybe?

And Ted’s other claim that Kasich lied?

The former governor did not accurately cite Kasich’s words when he tried to rebut them on CNN. During his speech, Kasich said that Ohio was 48th in the nation in job creation when he took office. He did not say that the state’s economy was 38th in the nation, as Strickland maintained.

What’s more, BLS data backs up Kasich’s assertion. Ohio’s rate of job creation did rank 48th relative to other states during Strickland’s term. So Strickland’s statement that Kasich “was not telling the truth” was itself incorrect.

Poor Ted had a rough day.

Finally, is it just me, or does Ted look a little…different? Let’s compare Ted from a few weeks ago, to this video. 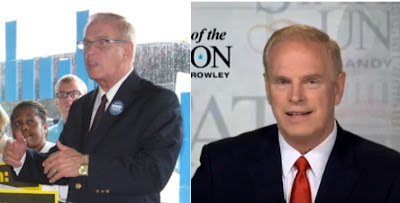 Did Ted get botox?