Good news for Ohioans last week; we aren’t like the rest of America.

If we were, our unemployment rate would have went up the way it did in 44 states and nationally.  Despite the Administration’s best efforts, ours stayed the same at 7.2%.
It’s worth mentioning that Ohio’s unemployment rate in July 2011 was 8.9%.  We have dropped 1.7% in the past twelve months, a significant shift in the right direction.  The national unemployment rate for the same period dropped from 9.1% to 8.3%, a drop of only .8%.
So why is Ohio greatly outpacing the rest of the country?
Ohio Democrats, in an effort to boost up Obama and soften the Governor for 2014, are going to tell you that it’s their leadership that set Ohio on the right path.  They will argue that the auto bailout and Ted Strickland’s leadership helped Ohio turn the corner well before Governor Kasich took office.
What’s the huge glaring problem with this argument?  Numbers don’t lie.

Anyone that considers losing 400,000 jobs during Ted Strickland’s administration a step in the right direction needs their head examined.  I realize the economy was tough during his time in office, but at what point do you start taking responsibility for your actions?
Obama also points to the auto bailout as the reason for Ohio’s recovery.  This would be great except that it’s not true.  In fact, auto-manufacturingjobs are actually down 3,200 when compared to January 2011.
The Democrat argument that Ohio’s recovery began on their watch is ludicrous; it simply mirrored the national recovery.  Don’t believe me?  Take a look at this graph that Democrats have used to try and make their point: 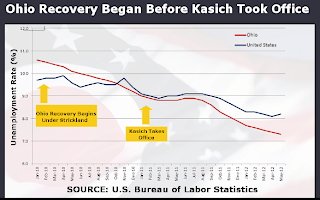 I went into more detail in a previous post about this.  The takeaway is the chart that the ODP is using to prove their point actually proves mine.  Ohio was on pace with the rest of the country until the Governor’s budget went into effect at which time the drop in our unemployment rate began to outpace the national rate.
You might notice that our unemployment rate started to outpace the national rate in July 2011.  What else happened that month?  Governor Kasich’s Jobs Budget went into effect.  Since that time Ohio has consistently outperformed the rest of the nation.
Yet somehow Democrats continue to take credit for Governor Kasich’s success.
If their policies are the reason Ohio’s economy is rebounding why is the rest of the nation still hurting?

6 thoughts on “The Democrats Unemployment Fantasy”