Wisconsin is about to become the country’s 25th state where workers are not forced to join or pay a labor union as a condition of being hired.

Today, the Wisconsin Senate passed the Right-To-Work bill. Union bosses and their minions were on hand to put forth their usual intelligent commentary.

The session started in the early afternoon with Senate Majority Leader Scott Fitzgerald (R-Juneau) saying he was advancing the measure to provide “true workplace freedom.” Almost immediately, ironworker Randy Bryce shouted him down from the balcony above.

“This is an attack on democracy,” said Bryce, who made an unsuccessful run for the Senate last year.

Right. Because nothing says democracy like coercing workers by law to pay a labor union.

It will now be sent to the Assembly, where it is expected to pass easily. Governor Scott Walker has promised to sign the bill.

This will put Ohio at a disadvantage with its midwestern neighbors when it comes to retaining and attracting companies to Ohio.

With Republican super-majorities in the Ohio House and Senate, and a Republican governor who just won a landslide reelection, there is no better time than now for Ohio to join other states and release its citizens from being forced to join a labor union against their will.

Unfortunately, however, we’ve heard little to no commitment from Ohio’s Republican leaders on the issue.

The Republican governor of Ohio, John Kasich, is attracting criticism for breaking with party lines to oppose right-to-work policies.

Kasich came out last week to say right-to-work laws are not necessary for attracting businesses despite many other Republicans arguing they will. The policy, which has passed in 24 states, outlaws forced union dues as a condition of employment.

“No, we don’t see that in our state, I don’t have any evidence of it,” Kasich said, according to the West Virginia Gazette. “Now, if we have major unrest I think it causes a problem, but without major labor unrest, we’re up 300,000, almost 300,000 jobs and I don’t find that to be a big issue in our state.”

In Ohio, legislators do face the burden of a possible challenge to newly signed bills. If enough signatures are collected in a given amount of time after a bill is signed, the law is put on the statewide ballot as a referendum.

However, public polls have shown public support for workplace freedom. The results depend on how the question is asked, but Gallup has found widespread national approval. 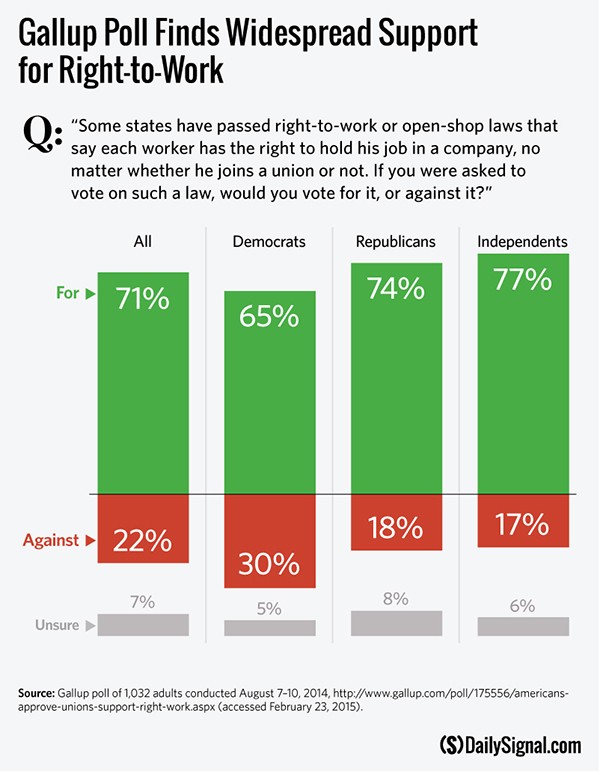 Quinnipiac also found that Buckeye voters approve of RTW by a margin of 54-40.

Granted, the Ohio General Assembly has its hands full right now working on the budget for the next two years, which must be passed by July 1st.

But once that task is finished, bringing workplace freedom to Ohioans should be taken up for consideration, if lawmakers are serious about improving Ohio’s economy.

AFP Ohio strongly supports Right to Work as a measure to make our state more regionally competitive for private enterprises beleaguered by compulsory union contributions. We believe workers deserve a choice in how and where their hard earned money is spent. It is troubling that many Ohioans are forced to pay into unions that are increasingly advocating for policies not in their best interests. We hope the legislature will follow Wisconsin’s lead and enact this freedom of choice measure, which is codified in Michigan, Indiana, Virginia, North Carolina, South Carolina, Georgia, Florida, Alabama, Tennessee, Mississippi, Arkansas, Louisiana, Iowa, Oklahoma, Texas, Kansas, Nebraska, South Dakota, North Dakota, Wyoming, Utah, Idaho, Nevada and Arizona.

4 thoughts on “Wisconsin moving towards Right-To-Work, Ohio getting left behind”