If you’ve read or watched any of the news stories about Ed Fitzgerald’s pathetic announcement “rallies” last week, you might have noticed a theme that his campaign is trying to push out there. 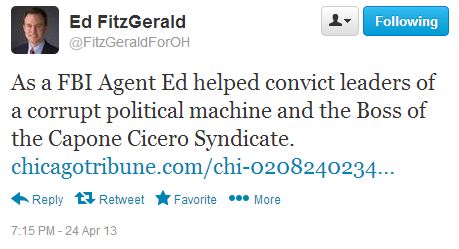 Ed Fitzgerald wants you to be impressed with his long 3-year stretch at the FBI right out of law school.

His campaign website claims that “He investigated political corruption and mafia influence, helping to bring the infamous Cicero crime syndicate to justice.”

On the Cuyahoga County website, his profile as County Executive goes further, saying that “As a Special Agent, FitzGerald was recognized by the FBI Director for excellence while heading up a wide-ranging and successful investigation into organized crime and political corruption.”

Records from the U.S. Department of Justice and articles about the FBI’s investigations of Cicero, Illinois politicians and mobsters between 1992 and 2005 identify the FBI agents and prosecutors who were involved. Fitzgerald’s name is nowhere to be found.

Cleveland Challenger contacted the Chicago FBI office to obtain a copy of Fitzgerald’s personnel file to identify the specific dates of his employment and assignments. The newspaper was told that FBI personnel records are not public.

Fitzgerald has been extremely vague about his FBI activities to reporters who’ve taken the unchecked version of his alleged crime fighting career and shared it with readers, listeners and viewers. He joined the federal agency sometime in 1995 and left sometime in 1998, according to published reports. He’s omitted information about the specific months and dates of his employment, and has never shared information about exactly what he did with the agency as a “crime fighter.” The county executive has never revealed exactly who he investigated or put in jail, and how a junior FBI agent came to lead major federal investigations of murderous mobsters and corrupt politicians.

Three major FBI investigations of mobsters and politicians in Cicero took place before, during and after Fitzgerald’s brief employment with the agency in the Northern District of Illinois, but nowhere does his name appear in any federal document as playing a “leading” or “heading up” role as he has claimed.

Notice the tweet I posted above where Fitzgerald boasts about “helping convict the boss of the Capone Cicero Syndicate”.

Did Ed get his junior G-man badge and travel decades back in time to the prohibition era to help put Al Capone behind bars? Was there another organized crime outfit known as the “Capone Cicero Syndicate?” A Google search of “Capone Chicago Syndicate” yields exactly two results as of this writing. One is the tweet mentioned above and the other is a blog post written about Ed published just last week that uses the same language Ed’s campaign used in that tweet.

Also mysterious is that the very Chicago Tribune article that Ed’s tweet links to makes no mention of Ed Fitzgerald at all. It also does not use the phrase “Capone Cicero Syndicate” or refer to the defendants as such anywhere. Notice also that the article is dated 2002, four years after Fitzgerald quit the FBI. Was he really crucial at all to the conviction of the case when it happened four years after he quit?

The fact is, that Fitzgerald has been accused of corruption himself by his fellow Democrats by awarding a contract in exchange for a campaign contribution at the direction of convicted former commissioner Jimmy DiMora, the kingpin of the Cuyahoga County corruption scandal.

I guess when your career is as lacking in accomplishment as Ed’s is, and you are the Ohio Democrats’ third or fourth choice as the nominee, you tend to start making up stories about heading up wide ranging investigations that brought down the Capone family.

We challenge Ed Fitzgerald to produce any records of involvement that show that he headed up any investigation of the case he linked to in the Tribune.

The Ohio Democratic Party really scraped the bottom of the barrel to come up with a challenger for 2014.

2 thoughts on “Is Ed Fitzgerald lying about his FBI “career”?”