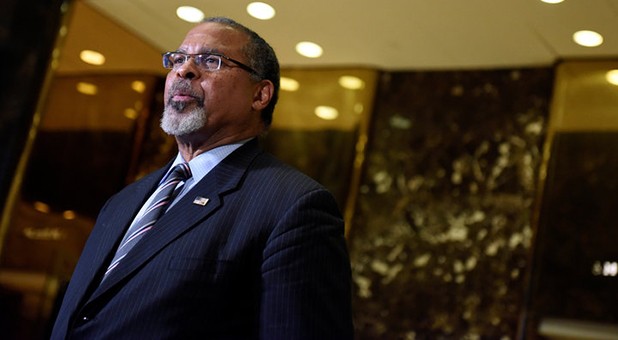 The national media has its sights set on Ken Blackwell. The former Ohio Secretary of State is on President Trump’s Presidential Advisory Commission on Election Integrity. This has made him the target of a bit of a smear campaign fueled by misinformation.

The Voter Integrity Commission is simply asking for information thats already public record
to ensure that no legitimate vote is canceled out by an illegitimate one. A single invalid vote in each district can change entire election outcomes – and the course of history.

The LA Times and other outlets have accused Blackwell of unethically publishing social security numbers on the Secretary of State’s website as if it was leaked information.They are using false headlines from 2006 while Blackwell was engaged in a gubernatorial primary with Jim Petro. Nothing was leaked although that is how they are framing it to tarnish Blackwell.

They say that Blackwell can’t be trusted because of this. But, what they are failing to understand was that this wasn’t an issue from Blackwell. This information mostly came from banks and lawyers. At the time, state law didn’t address the specific situation of redacting this information. The issues of the law highlight the fact that this wasn’t a “leak” as the media is portraying it.

The state’s only role in handling these bank documents was to post them within 3 days. State law was ambiguous about removing information on these forms. Blackwell then worked with the legislature to amend the law to allow for the redaction of this information.

“Blackwell acted correctly after initial resistance to removing the numbers, said Christian Jenkins, an attorney representing truck driver Darrel Estep. “What we’ve seen here is a 180-degree about-face and a decision to do the right thing,” Jenkins said. “I see that as a very good result in a very short time.”

This is what happens with the media recycles poorly placed news from over a decade ago. They are using highly biased Ohio articles to hit the Trump Administration. It’s cyclical. Ohio’s bad political writing from 11 years ago appears to be in a time warp and has been recycled for 2017.

Other media sources are trying to portray Blackwell as a vote suppressor because of a paperweight rule from his successor, Bob Taft. This dates back to 2004 when Ohio required that voter registrations needed to be on 80 lb paper.

The recommendation for this came from the United States Postal Service because people were cutting registration cards out of newspaper or regular paper and simply mailing them in. This type of paper was not made to endure USPS equipment.

The paperweight rule was backed by Taft's Director of Elections Pat Wolfe. She is not partisan, and also worked for @JenniferBrunner.

At the time, the problem was, voter registration forms were being shredded by @USPS machines.

Second, the paperweight rule was based on a recommendation by @USPS, & policy in place by Gov. Bob Taft. Safeguarding registration forms

However, since so many forms were being turned in by groups through other means, we changed the paperweight rule BEFORE the '04 election.

There were no call of outrage form the left about this rule when Taft was Secretary of State, but they simply used it as a wedge to attempt to smear Blackwell in his gubernatorial run. Now, uninformed and biased journalists are regurgitated this 13 years later to attack President Trump.

Liberal outlets are on red alert over rumors that Ken Blackwell is being considered for White House domestic policy advisor, for good reason. The...