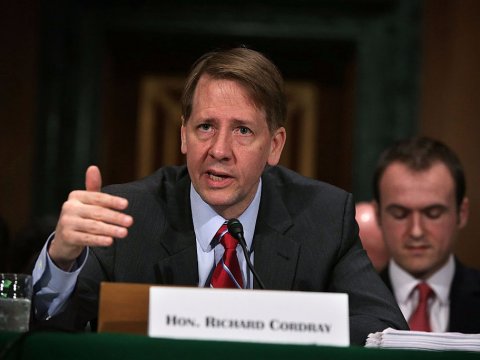 We have been bracing for Richard Cordray to announce that he is running for Governor of Ohio. The head of the CFPB has been using the power of his position to apparently earn favor with liberal donors in preparation for a run.

Former Secretary of State Ken Blackwell has some comments below on how Cordray’s actions have harmed Ohioans and college students in particular.

There is no doubt about it. Richard Cordray, the far-left head of the Consumer Financial Protection Board (CFPB) wants to run for governor of Ohio. Speculation is growing that an official announcement could come at any moment.

I have no doubt that my fellow Ohioans will reject Obama-era holdover Cordray’s radical philosophy on Election Day, just like they did when he ran for Attorney General in 2010.

One might assume that a government agency with “consumer financial protection” in its name might actually protect consumers. Sadly, nothing could be further from the truth. Cordray’s agency, with more than a $600 million annual budget, has developed a lengthy track record of mismanagement, heavy-handed mandates, and outright corruption.

Cordray knows his time is limited, which is why he is desperate to use his rogue agency to garner political support from the political swamp for his future gubernatorial campaign.

In a stunningly brazen move, we are just learning of a secret deal Cordray made last month with hedge fund manager David Uderitz of Vantage Capital to manage student loan collections for the same delinquent student loans his firm owns through the National Collegiate Student Loan Trusts.

As too many students and parents are aware, more than 1.1 million students are in default on their school loans, and more 40% of student borrowers are not making any payments. This is a financial disaster that cannot be sustained.

Part of the trusts’ problem is many of their ownership details of loans are incomplete. But instead of this being fought out in court through a lengthy process with borrowers, Corday’s CFPB has agreed to give Udertiz’s firm full control over the collection process.

This is crony capitalism at its worse. This deal would allow a hedge-fund manager profit from the CFPB’s decision by circumventing the legal system. This hedge fund now has CFPB’s blessing to charge fees and administer a $21.6 million government settlement trust owed to students. And, as the fund owns some of those delinquent, they will be pocketing the remaining funds.

Why would Cordray and the CFPB intervene? The Ohio Republican Party recently filed a FIOA request to get answers. But there is no doubt that this move would not only give Cordray an empty campaign talking point about doing something on student loans, even though in reality he simply turned over student loan collections to a well-connected hedge fund.

Cordray and the CFPB have far exceeded their authority in this matter, and are only making things worse. This difficult situation for students and lenders should be settled in court, not by politically motivated bureaucrats who invent their own rules.

Obama is no longer in the White House, but his legacy of unconstitutional overreach and unchecked regulations lives on through the CFPB. President Donald Trump should have fired Rich Cordray and replaced him long ago.

Ken Blackwell served as the mayor of Cincinnati (1979–80), the Ohio State Treasurer (1994–99), and Ohio Secretary of State (1999–2007). He was the Republican candidate for Governor of Ohio in 2006. Most recently, he served as Domestic Policy Advisor to the Trump Presidential Transition Team.


In this article:Ken Blackwell, Richard Cordray

Cordray Does Big Favors For Liberal Donors; Is Campaign Announcement Next?

The national media has its sights set on Ken Blackwell. The former Ohio Secretary of State is on President Trump’s Presidential Advisory Commission on Election...

It’s no secret that the Democrats’ bench in Ohio is on the light side going into the 2018 election cycle. Beyond Congressman Tim Ryan (a...