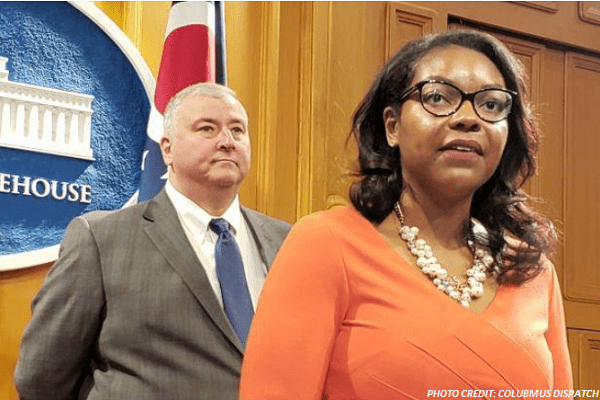 Speaker of the House state Rep. Bob Cupp (R–Lima) says he wants to clean up the stink of corruption surrounding the Ohio House. Here’s a great way to do that, and it doesn’t involve FirstEnergy.

To tell the tale of the Householder scamola called Senate Bill 4, let us start at the beginning of Larry Householder’s corrupt tale, back in the distant time of 2000.

From 2000 until 2004, Householder served as Speaker from 2001 to 2004, a reign that ended when the Federal Bureau of Investigations launched an investigation into allegations that Householder and his aides took kickbacks from vendors and traded legislation for campaign contributions.

Householder, aided by FirstEnergy lobbyists and other Capitol Square swamp creatures, ran for state representative in 2018 and won.

In return for Democrats’ votes and souls, Householder handed out committee appointments to his enthralled Democrats, including leading seats on Ohio House committees and subcommittees for education, criminal justice, and energy generation.

Those Democrats who supported Householder all received fat campaign checks from FirstEnergy—how unexpected!

Also in 2019, Ohio Republican lawmakers joined Ohio Democrats to pass House Bill 6 (HB 6) at the behest of FirstEnergy, whose lobbyists had been working with Householder.

In exchange for his votes for Householder and the Householder Tax adding to Ohioans’ energy bills, Jack Cera (D– Bellaire) received a $1,000 advance from FirstEnergy and an additional $2,500 for his effort this year.

Reps. Lisa Sobecki (D–Toledo) and Thomas West (D–Canton) round out the corruption crew, pocketing a total of $8,000 in FirstEnergy cash over the past two years. Both Sobecki and West delivered their votes to their buyers… selling out their districts and souls to both Householder and to FirstEnergy’s pocketbook.

Campaign cash wasn’t the only thing Householder traded in return for Democratic Party support, though. He gave a big, fat handout to them in the form of a last-minute amendment to SB 4 benefiting their special interests.

SB 4 started out as focusing on promoting facility construction assistance for local public schools. Householder inserted an amendment in the dark of night, forcing school districts to an artificially high wage rate for construction. That… is the opposite of making it easier to build public schools, isn’t it?

Thanks to Larry’s shady deal, school districts would pay this needlessly expensive rate for construction, instead of the normal, market rate Ohio lawmakers have intended the district—and by extension, taxpayers—to shoulder since 1997.

As you might guess, Householder’s bipartisan corruption crew in the House—including Republicans and his enthralled Democrats—happily voted for SB 4, and the higher taxes it’d create.

There is still time for Cupp to fix what Big Larry broke, though. Householder’s end of the payola with House Democrats doesn’t take effect until October 13.

Acting now to repeal SB 4 and having an honest debate on the bill’s merits—sans Householder’s dividend to the Democrats who sold their souls to the Devil of Downtown Columbus—is the right thing to do, and it’s the only way for Cupp to fully get  the stink of corruption out from the Ohio House.