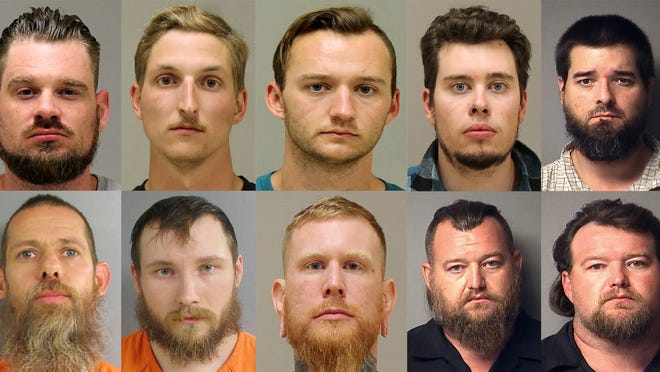 A group of Michigan extremists met somewhere in Dublin over the summer, making plans to abduct or execute Michigan Gov. Gretchen Whitmer (D) in resistance to emergency public health measures in response to the ongoing COVID-19 pandemic.

According to the Federal Bureau of Investigations, Adam Fox, Barry Croft, Ty Garbin, Kaleb Franks, Daniel Harris, and Brandon Caserta met in Dublin, Ohio on June 6 to select targets to begin a violent overthrow of a state government, focusing on states “they believed were violating the U.S. Constitution, including the government of Michigan and Gov. Gretchen Whitmer (D). Several members talked about murdering ‘tyrants’ or ‘taking’ a sitting governor.”  In that Dublin meeting, “the group decided they needed to increase their numbers and encouraged each other to talk to their neighbors and spread their message.

As part of that recruitment effort, Fox reached out to a Michigan based militia group” known as the Wolverine Watchmen, government prosecutors allege.  The men planned to kidnap, transport and “try” Gov. Whitmer for “treason,” at a location somewhere in Wisconsin, according to prosecutors.

At a July 18 meeting, also held in Ohio, the Michigan men planned attacking a Michigan State Police facility and Gov. Whitmer’s vacation home. Garbin told the gang that “he did not want to go after the Capitol,” but added that he “was ‘cool’ with going after the Governor’s vacation home, however, even if it only resulted in destruction of property.”

The conspiracists later met in Michigan as recently as September, conducting field exercises, training, and putting Gov. Whitmer’s home under surveillance. They planned to execute the “snatch and grab” within the next few weeks, before the November 3, 2020 election.

It’s fortunate that the federal government was on the ball and caught these thugs before they launched their plan. Disagreeing about politics is one thing, but violence is never the right answer for expressing those disagreements.  Questions remain unanswered, however: why were the Michigan militiamen meeting in Ohio? Were they meeting with fellow fringe extremists living in the Buckeye State, or were they just grabbing a bite at the local Panera Bread?  We’ll keep an eye on this story, and let you know.

It shouldn’t be surprising that the Columbus City Council is more interested in creating paperwork and wasting people’s time than helping create well-paying jobs,...